ClamXAV is Ready for macOS 11

On June 22 2020 it was announced at Apple's Worldwide Developers Conference that macOS 11, also known as Big Sur, will be released this year. It has been more than 19 years since Mac OS&nbspX was released and there has been much anticipation and speculation about how the forthcoming version will affect the future of macOS and the compatibility of current applications.

Will ClamXAV be Compatible?

The impending release of macOS 11 Big Sur brings significant changes to the design, security and performance which, although exciting, leaves app users questioning if their apps will be compatible.

As an app developer, we’ve been testing on Big Sur in-house since the first developer beta was released in the summer, and and we are happy to report that ClamXAV is fully-compatible with Big Sur. 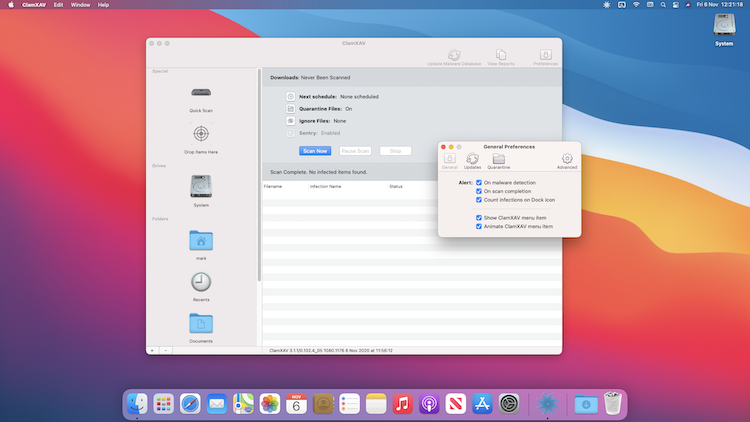 We have previously made modifications to the app and conducted testing to ensure it will be fully compatible with Big Sur and can assure users that ClamXAV will function the same as it has with previous macOS versions.

As a successor to macOS Catalina, Big Sur brings significant changes to the appearance, and will be the first OS to be compatible with Apple’s new ARM-based processors, dubbed Apple Silicon.

The most noticeable change is a complete redesign of the user interface. Big Sur adopts a new and more rounded look with a completely different menu bar, redesigned Dock, updated icons, and a return to heavy use of transparency.

It also comes with major upgrades to the Control Center, Maps, Messages app and a new version of Safari.

There has been much anticipation about the significance this version will have on the future of macOS. The catalyst for this has been Apple transitioning away from Intel x86 processors to their custom-built processors in Macs going forward.

Known at the moment as Apple silicon, Apple have stated that this will not only boost performance but also lower power consumption and allow for an improved battery life.

With this transition happening over the next 2 years, it is clear that Apple are building their own family of chipsets, which currently is happening with the iPhone and iPad where ARM-based Apple processors are already used in iOS devices. Essentially, everything is going to be running Apple’s own processors which has influenced the design of Big Sur immensely.

You can read more about Big Sur in the macOS page on Apple's website.